ChronoWolf – Meet At the Gazebo

This album is a series of tracks written for performances or shows at MAGFest. Hence the title which references the iconic Gazebo, which is the centerpiece of the Gaylord International Resort and Convention Center in National Harbor, MD – where MAGFest has been held in recent years.

As for the capitalization of the title – “the” from “Meet At the Gazebo” is NOT capitalized so that the title may share the acronym “MAG”.

The album contains a lot of history related to my own personal MAGFest journey, and I will attempt to shine a light on some of that here which each track…

Track 1 – Game On (theme from MAGFest Versus)
This track was the theme song for the popular MAGFest Versus! show which was held at both MAGLabs 2016 and MAGFest 2017. I was approached to write a few songs for the show in mid-2016 (for MAGLabs). After writing a series of tracks (including this one for the main title/intro) I was invited aboard Versus team, lending my video, visual effects and live show directorial experience to the event. After a successful show at Labs, I was promoted to MAGFest staff and show director for the event the MAGF 2017, where we received standing room only audiences of over 700 for both nights the event was held.

This piece is very iconic for me because ultimately: it was responsible for transitioning me from a MAGFest attendee to a fully active MAGFest staff member, and I have been loving every minute of it!

Track 2 – Level 2
Also part of the MAGFest Versus! soundtrack, this piece is the backdrop to some of the video game challenges contestants of the game-show participated in. The highlight for this track was at MAGFest 2017, where it played over a 4-player versus style challenge featuring Professor Shyguy, Matt Mercer and Matt Conn.

Track 3 – Look Into My Eyes
Originally written during a 3-hour Twitch stream for a show I do for GOG.com’s Twitch channel (with over 36,000 subscribers), this piece was refined and performed as part of my curated performance at Chipspace for MAGFest 2017. I shared the stage for the 8static show with other chipmusic greats like Auxide, Solarbear and Iron Curtain. For this performance, I asked for an audience volunteer member to stand directly in front of me while I proceeded to play one melody with my left hand, one melody with my right, and never breaking eye contact with the volunteer. The stunt was very well received by the audience.

Track 4 – Meet At the Gazebo
2 days before the Chipspace show I still had not decided what my 4th track for the performance was going to be. Thankfully, MAGFest is a great place for creativity and inspiration. After a few (dozen) beers, and some great MAGFun I sat down to my portable workstation in my hotel room and wrote this piece in under 3 hours and added it to my performance. It was a fun piece to perform and I further refined it for inclusion on this album.

Track 5 – So It Begins
This piece was a Chiptune = WIN Volume 5 reject. The original piece featured some voice-over sound bites from popular video game voice artist George Ledoux, however it was not selected to be part of the ChipWIN Vol.5 compilation album. I decided to include it in my performance at MAGFest, but this time: removing the voice-over track. After I finished my performance I was truly humbled by the audience chanting “holy shit!” This piece was also included as part of the MAGFest Versus! soundtrack for the final Green Screen challenge game against the evil Count Buff Von Studhorse.

Track 7 – Singularity
Originally featured on Chiptunes = WIN Volume 4, this track had never actually gotten its own official release from me. Considering this was part of my MAGFest 2016 open mic performance, it was only fitting that it be included on this album. Interestingly: because ChipWin Vol.4 was very new at the time, this piece was featured in a remix form (by JKLOL) on my first album ‘Genesis’ instead of the original featured here. 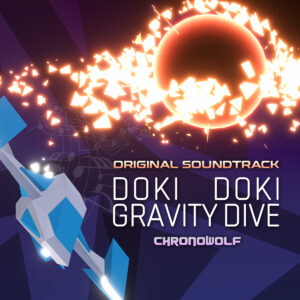